from the Lincoln Journal Star 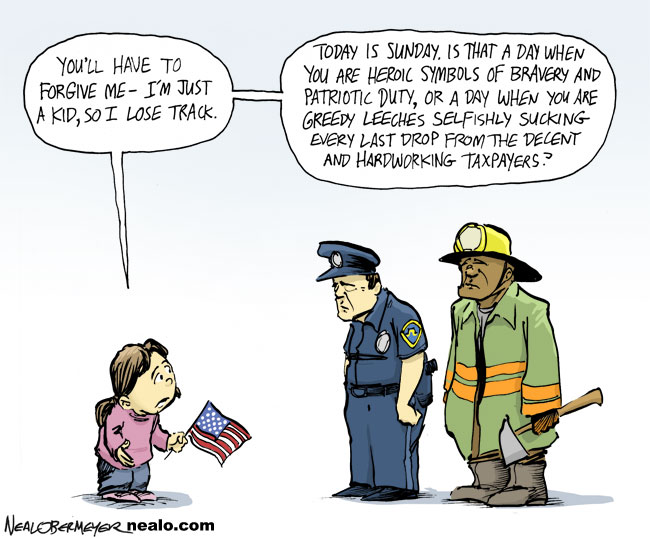 Regular readers of this blog will recognize this cartoon as a salvaged reject from January, but this topic seems to be getting only more newsworthy since I first submitted it.

A very poignant illustration (no pun intended) of the hypocrisy of public-servant hero-worship paired with public-union demagoguery was a recent run of cartoons from Omaha World-Herald cartoonist Jeff Koterba. I won’t post his cartoons here so that he doesn’t threaten to sue me again, but I’ll do my best to describe and link to them.

Koterba drew a cartoon of Tuscon shooting victim Christina Green meeting 9/11 first responders in Heaven, as he writes about (and posts the cartoon) on his blog:


When I learned that Christina Taylor Green had been born on September 11, 2001, I couldn’t help but think of those heroic firemen who lost their lives that day. The idea came so quickly I worried that maybe it wasn’t good enough to publish. But sometimes the ones that come quickly and without notice are the best ones.

Then on March 1, Koterba hopped on the public-employee-bashing bandwagon with this cartoon (from Omaha.com), which shows the lazy, fat person – labeled “public worker” – holding a “Don’t touch my pension!” sign, crushing the lean figure labeled “taxpayer.”

I chimed in with

I didn’t get a response.

So then to address the hypocrisy, I made this, which I promise you is protected under fair use as parody.

As if the March 1 cartoon never happened, World-Herald executive editor Mike Reilly wrote a March 6 column in the paper about Koterba’s thoughtful treatment of our nation’s heroes.

While his cartoons are frequently funny, biting commentary, his pen can be as poignant as it is pointed.

“It’s important to not always be criticizing,” Koterba said. “Sometimes it’s better to just reflect, to capture the emotions we all are feeling.”

Yeah, but I think it helps when the people you’re praising aren’t the same people you’re shredding based on thoughtless, half-true (at best) conventional wisdom the next day.

UPDATE: While on the topic of Koterba-mythologizing, it appears that he edits his own Wikipedia page, which, unsurprisingly, is strongly discouraged by Wikipedia.